GSI performed an extensive test pile program to determine which loads could be achieved with differing tip elevations of test piles. Obviously, pile loading was not consistent across this site. Strain meters were placed where soil characteristics changed along the length of the pile. After testing, we were able to assign unit skin friction values along the length of the pile in the different “zones”. This effort helped to shorten previously designed tip elevations resulting in substantial project savings. The piles were installed in up to 40’-0” of uncontrolled fill near the Ohio River. Encountering obstruction locations were problematic, but did not present issues that could not be overcome. The Auger Cast Pile was the most economical approach to this job. 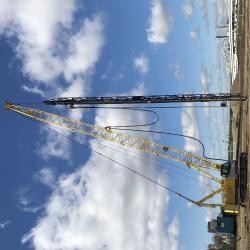